After just over 10 years at our last location, Sage Arts Studio has moved. Our new location is conveniently located on the corner of 43rd and Forest Home Avenue in Milwaukee's Jackson Park neighborhood. Stop in today to take a tour of our school and watch some classes.

Kids Classes Now Forming - Our Kids classes are for children 7-12. If your child has an interest in the Martial Arts, or could benefit from the many values and life experiences we offer, contact us today, classes will begin when we hit critical mass (4 students). Our Kids classes involve a mix of Kickboxing, Escrima, Yoga and Jiujitsu and are typically held Mondays and Wednesdays at 5pm. Call today for more information (414) 520-7243.

Stop The Bleed Course - Free to the Public - In January of 2020, we will be hosting a special hands-on class to educate the public on how to act to save a life in the event of a bleeding injury. As you may know, blood loss from trauma (knife or gun wound) is the leading preventable cause of death. This course is taught by a Certified Firefighter from Germantown and will be Free to all interested.

Anthony Sell has over thirty years of teaching experience, having worked with thousands of students, ranging from 3 years to 76 years in age, including a very special few with unique learning disabilities and physical challenges.

"The question I ask my students most often is 'What are you doing this for?' It's a question they will revisit often throughout the course of their training, because only by clearly defining what your objectives are will you ever have a chance of obtaining them."

Anthony holds a Level Three Instructor Certificate under Sifu Rick Faye (Minnesota Kali Group). He is a Lakan Guro Level Three Instructor under Guro Dan Inosanto in the Inosanto-LaCoste System of Kali and an Apprentice Instructor Level Three in Jeet Kune Do. He worked for several years as a Personal Fitness Trainer. He has also competed on a National level in WEKAF events as a full-contact stickfighter, qualifying for the US team in 1998. Anthony also holds a 2nd Degree Black Belt in Doce Pares Eskrima and a 2nd Degree Black Belt in Tae Kwon Do under Guro Tom Sipin (Four Winds Marital Arts Academy) in West Allis, WI, and an Instructor Permit in Maharlika Kuntaw under Guro Buzz Smith in Traverse City, MI.

An avid student of Zen Buddhism and Taoism, bringing the philosophies and concepts within the Martial Arts to life with insightful stories and common-sense explanations. Anthony is also an accomplished Photographer, Graphic Designer, Illustrator, Musician, an avid Writer, and a Fine Arts Painter. He holds a Bachelor's Degree in Fine Arts from the Milwaukee Institute of Art and Design, and is an award winning Plein Air (on location) painter. 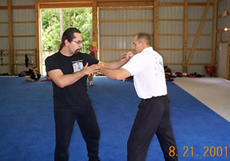 or email anthony -at- sageartsstudio.com
for more information.